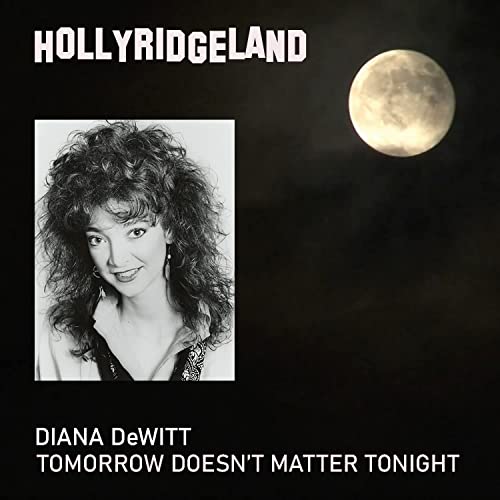 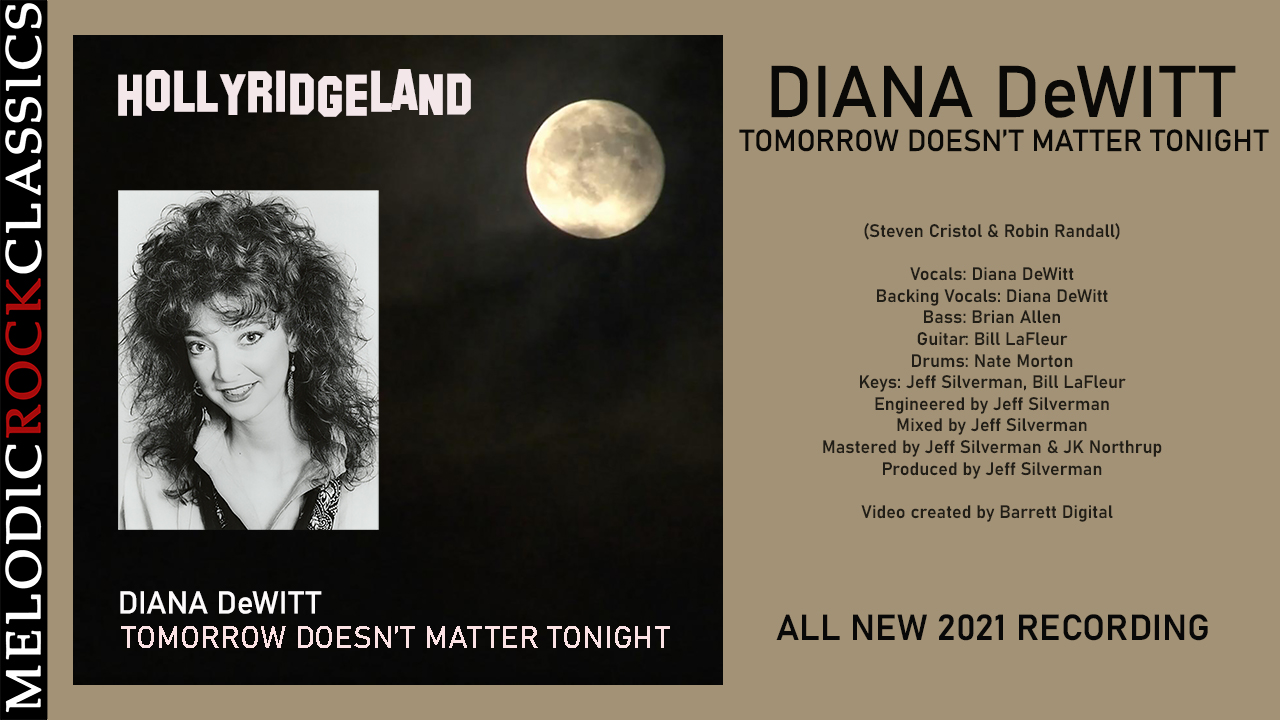 From Jeff: I was especially honoured to have been asked to produce, mix and master this current updated rock version of the STARSHIP classic 1986 hit “Tomorrow Doesn’t Matter Tonight” for songwriters Robin Randall and Steven Cristol. The only part used from the original demo is Diana DeWitt’s vocals. Everything else was recut from scratch.
My “Muse” cried out for the Metal / Rock “Evanescence” amazing vocal / beefy low power guitars and drum sounds mixed with lots of twists and turns, dynamics and “ear candy.” More below about how this all came to be.
From Robin: This is the most successful song in my career. Steven and I had met each other at Dick Grove School of Music. We decided we should write a song together. I remember the working title Steven had was “Paranoia.” When I got that chorus melody, I think that inspired him to change it to what we now know as “Tomorrow Doesn’t Matter Tonight”. We recorded it at King Sound produced by fellow Dick Grover, Claude Gaudette. After pitching it to many artists and getting it turned down or no response, Steven took it to the Los Angeles Songwriters Showcase (LASS), a place I frequented, but could not make it that night. Songs were pitched to industry people in hopes of getting picked up. Dennis Lambert, producer of the Starship, chose our tune, they cut it and it was the 3rd single on “Knee Deep In The Hoopla” and the rest his history! We owe much thanks to the founders, John Braheny and Len Chandler. The new 2021 version on this Anthology is a brand new huge production produced by Jeff Silverman built around Diana DeWitt’s pristine and powerful vocals.

From Steven: In 1985 Starship, having just shortened the band’s name from Jefferson Starship, needed one more single to complete their “Knee Deep in the Hoopla” album. Producer Dennis Lambert called a special meeting of songwriters that was put together by the Los Angeles Songwriters Showcase and ASCAP. Eight ASCAP writers who have had at least one major-label artist cover were invited. One of those writers was Steven Cristol, who had written the title cut on Harry Belafonte’s most recent album at the time. When he heard “Tomorrow Doesn’t Matter Tonight,” he said “That’s a single!” After playing it for the band, he called a couple of days later to say that they would be cutting it.

Those tracks transported me back to my meeting with Dennis Lambert when I played him the song. I remember when he hit the pause button after the first chorus and said, “I don’t need to hear the rest of this to know that it’s a hit single.” Then I think he listened through to about the middle of the out-chorus, turned it off and said, “Okay, I’ve got what I need.” — and stuck the tape in his pocket!

From Bill: Nate and Brian are my sort of dream band that I always imagined. Jeff, you found Nate many years ago and Robin and I knew Brian from Musicians Institute. Can’t go wrong with a rhythm section like that… or a great song! I knew you were the person to bring this to the next level, it’s just one of those things that really doesn’t need much thought. The results always speak for themselves and it’s always the best. It’s also pretty amazing since Diana’s vocal is still the actual same vocal that Dennis Lambert heard and got the song cut by Starship. That vocal is probably the first recorded capture of the melody and lyrics and pre-dates Starship’s hit. That’s some H.G. Wells time machine stuff there! 🙂

From Jeff: Robin originally asked me if I’d like to remix the original 80’s demo (re above) and sent me the multitrack for me to preview and give her my take on remixing it with the original audio tracks. In other words, no changes to the music, just make it sound better. I immediately suggested instead of staying in the past, why not keep Diana’s lead vocal, do a brand new production from scratch and go for a metal / rock / version that could not only appeal to the Melodic Rock crowd, but also appeal to the current ROCK marketplace with an emphasis on licensing it for a major film.

I sent the most recent release from EVANESCENCE to both Bill LaFleur and Robin and almost immediately, got their thumbs up in a big way to move forward. Bill and I had a pre-production meeting and went over some of my general thoughts but let him go to town on his own with his guitars and keyboard arrangement. All of this guitars and leads are SMOKIN’ and his tasty acoustics along with some keyboards inked the energy and direction for everyone else to follow.

Then, Robin and Bill recommended Brian Allen on bass and Nate Morton, who was the perfect choice from Drums. Nate and I also had a chance to discuss performance ideas and I sent him the same reference track so we were all on the same page. He interpreted the BIG ROCK drum part that we were all looking for and then some! I even asked him to give me some 2 and 4 bar fills after he finished the song, which is what you hear leading out of the quiet breakdown section out in the vamp out. I told Nate that I LOVE long 4 bar files, which a lot of drummers are shy about for some strange reason. I said think Ringo! HE got it! The end result was Brilliant and now… it was my turn.

Then I had a chance to do what I love to do, making all the parts morph together as I had envisioned and even added a few small parts on keys. The end result exceeded my expectations to say the least.

I do have to say, as a producer, I find the best way to get the most out of the players is to give them my basic ideas (aka compass) but not micromanage them. It only inhibits the end results. So the arrangement ideas that Bill put forth were first and foremost, BRILLIANT and set the entire tone for the other players, who did the same. They ROCKED!

The intent is to continue the legacy of the song with the hopes that by modernising it, it will find new life not only in the music world, but with film and tv synch licensing. As a dear friend and AMAZING record promoter told me, you can definitely expect the unexpected when you bring music out into the world and thanks to Andrew McNeice from Melodic Rock Classic Records, the song is doing exactly that.

What it all comes down to is, this song represents a magical collaboration by us all and is every bit the hit it was, and still is!

You can watch, stream and /or purchase at:

From Jeff: I’ve written with Robin Randall in the past but wrote many songs with her Mum, Judithe. This massive 8 CD album is a tribute to all the many songs, songwriters and artists that she and Robin worked with over the years. I had a song on this project that I co-wrote and produced called EYES OF NIGHT, which was the first 3 way collaboration the 3 of us created together. The song ended up being the title track to Shari Belafonte’s European release back in the late 80’s. BUT Judithe was much more than an amazing lyricist. She was a genuine lover and supporter of the arts and did so much to bring together and network so many talented songwriters and artists and even helped some get recording deals! And she never asked for a penny for any of her efforts either. She was also a brilliant artist to say the least. Here are just a few of her incredible paintings that she’s done over the years she was on this earth.