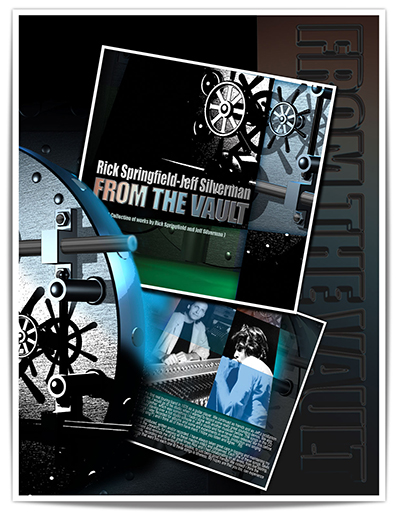 FROM THE VAULT consists of 13 tracks, originally recorded between 1986 and 1999, that have been digitally re-mastered by Jeff Silverman, giving the audience an entirely new listening experience.

Springfield and Silverman started recording together in the late 1970’s. “I would go to Jeff’s studio when I wanted to record some really great sounding demos,” says Springfield. “We also wrote quite a few songs together, which was something I hadn’t done with another musician before.” Silverman states “Rick and I discovered that we had a great deal in common… our professional relationship began to evolve into more than just playing live. It grew to recording his demo’s together, writing together and eventually making records together.”

“From the Vault (A Collection of works by Rick Springfield & Jeff Silverman)” consists of 13 tracks, originally recorded between 1986 and 1999, that have been digitally re-mastered by Jeff Silverman, giving the audience an entirely new listening experience. Many of the tracks, such as “Dancin’ on the Edge of the World”, “Right Planet, Wrong World”, “You Write the Book”, “Dream in Colour” and “Religion of the Heart” are previously unreleased versions of the songs. Others such as “Somewhere”, “Monkey”, “Love Receiver” and “My Depression” were later recorded for Springfield’s albums.

Springfield states that “The songs on this CD are the result of long hours slaving over a hot studio console in Jeff’s studio and have never been released like this before.” “Even though many of the songs on the CD were never released,” agrees Silverman, “the care, the hard work and love that went into making every song the best it could be, was always our main objective.”

Having performed for millions of fans over the last three decades, and showing no signs of slowing down, Rick Springfield continues to play over 100 shows a year, sharing his love of performing, unstoppable energy and his unique brand of crowd interaction with thousands of fans each night. Rick literally wades deep into the crowd at each show. His tour dates also include a 5-day fan oriented cruise. In 2005, Springfield returned to daytime TV’s General Hospital as the character he originated in the 80’s, Dr. Noah Drake as well as assuming an alternate character, Aussie rocker Eli Love. More recently, Springfield appeared on a 4 episode ARC on Showtime’s hit show “Californication’s” 3rd season.

Jeff Silverman is a veteran producer, engineer, songwriter, accomplished musician and singer. He started playing piano at the age of 5, then guitar at 10 and not long after, made the decision to make music a lifelong career. After traveling around the US in club bands after high school, he arrived in LA in 1976 and almost immediately met up with Rick Springfield for his first US tour of the “Wait for Night” album. He has been a staff songwriter at Motown/LA and has produced and/or co-written with a number of artists including: Rick Springfield, Michael Peterson, Nick Gilder, Debra Lyn and Aeone. Jeff has also mixed, mastered and edited for artists such as: Charice, Boyz to Men, David Cassidy, George Clinton and Prince and has performed live with Rick Springfield, Roger Miller and Redbone. He currently operates Palette Studios and his own Avid Pro Tools HD with 2 HDX cards in Nashville, Tennessee where he writes, produces and records.

Having started playing piano at the age of 5, and then guitar at 10, I made the decision to make music my lifelong career.

Directly after I graduated high school in 1972, I traveled around the States in club bands. I finally arrived in LA in 1976 and almost immediately met up with Rick Springfield. He was auditioning lead guitar players for his first US tour for the “Wait For Night” CD. Out of approximately 40-guitar players, I was picked to be his featured lead guitarist / background vocalist.

When I toured with Rick (pre –Jessie’s Girl), we were considered “the opening act”/ second billing so to speak. That never bothered Rick, myself, nor any of the amazing players in the band. It was still a thrill to be out doing gigs in front of thousands upon thousands of people, opening for acts such as Heart, Edgar and Jonny Winters and Richie Furay. We did several live and taped performances for “Dick Clark’s American Bandstand” as well as many other US TV/Concert arenas. Those gigs were some of the most exciting times I have ever had in my “live” performing experiences. The energy of that band was rockin’ with Rick at the helm, Jack White on drums, Gabe Katona on keyboards and Robbie Levin on bass.

At that time, Rick and I were both signed to Carman Productions, consisting of Tom Skeeter and the late Joe Gottfried, owners of Sound City Studios. The studio facility had so many hit acts that recorded their music there, I can’t even begin to list them all so here’s a VERY informative link www.soundcitystudios.net that will let you taste the incredible rock n’ roll energy that past through those doors.

Joe also managed Rick at that time and was, in my opinion, the person who deserves the most credit for launching Rick to stardom. Joe knew the true meaning of artist development, something missing in our music industry today. Joe gave both Rick and I his unconditional support, which included an endless amount of studio time. This made it possible for us both to grow in ways that would not have been possible without his belief in us. Through this mutual connection, came Bill Drescher, who at that time was house engineer at Sound City. Bill and I co-produced a number of songs for my artist career. He then became Rick’s engineer and co-producer of many of his pre and post Jessie’s Girls songs.

My love for guitar was only a small part of my “big picture.” My dream also included writing, recording and producing songs. My passion was and still is, making great music! The only way I could afford to keep up with my creativity was to run and operate my own studios (tools of the trade so to speak!). So, I started out at the age of 10 with my initial demo studios in my basement, evolving to project studios in reconverted bedrooms in my homes, and eventually to my professional home studio facility, capable of making records that are competitive with the best of the best. Today, the dream is still alive and I am more creative than ever, writing, producing and making records in my current Avid Pro Tools HD 3 music production studio here in Nashville Tennessee.

During my growing process as an artist and engineer/producer, Rick and I discovered that we had a great deal in common. We wanted to reach out to uncharted territories, experiment with new sounds, and have the freedom to create without the pressure of big budget studios. So, our professional relationship began to evolve into more than just playing live. It grew to recording his demo’s together, writing together and eventually making records together.

It took 22 years to get these songs out of “The Vault” to see the light of day, but persistence and tenacity rules – a trait that both Rick and I have in common!

Even though many of the songs you will hear on the CD “From The Vault” were never released, the care, the hard work and love that went into making every song the best we could make, was always our main objective. It gives me great pleasure to share this “Collection of Works” with you. It represents something that some artists never get a chance to share – and that is complete uncompromised creativity.

To see some of Rick and Jeff’s live performances, click here!

Additional info. about Rick and my co-writes, recordings and co-productions on “From The Vault”

“Dancin’ On The Edge of the World” (track 01): This version was never released, but a European rock band by the name of “The Distance”, re-cut a version of it.

“Right Planet, Wrong World” (track 02) and “You Write The Book “ (track 03): This is the first time that these versions have ever been released.

“Dream In Colour” (demo) (track 07): This was the first of our song writing/co-production/collaborations. This is the original unreleased demo for his RCA “Rock Of Life” album/CD.

“Religion Of The Heart (demo)” (track 09): This is the original unreleased demo for Rick’s Karma album/CD.

About Ricks other songs, recordings and co-productions:

“Woman II” (track 08): This version was released on one of Rick’s Limited Editions for fans only. 1200 copies

“Why Don’t You Dance” (track 10): This version was released on one of Rick’s Limited Editions for fans only. 1200 copies

“My Depression” (track 12): This is the original demo for the version released on his CD “shock/denial/anger/acceptance”.

“In Veronica’s Head” (track 13): Rest assured that this is a “never been heard” unreleased version!

Regardless of the past history of these songs, the fact that they have just been re-mastered, gives one an entirely new listening experience.